Allan Amato is a photographer living in Los Angeles. Born and raised in Harare, Zimbabwe, Allan discovered his love for photography after Hurricane Katrina forced him re-examine the course of his life. Since then, he has worked with a variety of clientele from Ministry to Nick Nolte to Terry Gilliam. Allan is currently working on directing a feature-length documentary with creative partner Olga Nunes called Temple of Art.
His lifelong dream is to become an honorary member of Monty Python. 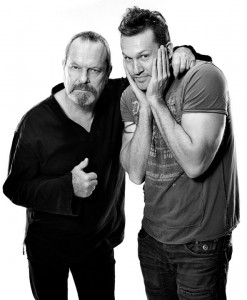 “Allan Amato’s cosmic camera sees through mortal skin to reveal the lambent ideal self beneath. Where Amato aims his lens, gods and superheroes, angels and demons are conjured; vinyl mythologies are summoned; mere flesh becomes dreamscape and deluxe collage where everything, especially the grotesque, is beautiful. Alchemist of light and composition, distiller of Platonic gold from leaden flesh, Renaissance futurist and musclebound death machine to boot; Allan Amato is easily my favorite photographer.”
— Grant Morrison

“Allan Amato is a lot like a wizard: his photos take us places we’ve never been. This is particularly unsettling when you were the one in the photograph.”
— Neil Gaiman

“Allan’s photos are where science and magic overlap.”
— David Mack

“I can’t stand to look at myself unless I’ve been photographed by Allan Amato. His dazzling compositions and naked artistry are breathtaking. Plus, he makes me look thin. All right: thinner.”
— Kevin Smith